'Buzz' words that can Buzz-Off this year!

Did you know that Oxford Dictionaries updates its book four times a year, and once a word is added to the dictionary, it can never be removed?  That's a lot of 'forgotten' words floating around!!  Not that any of us actually owns a dictionary any more, but if we did, which words would you like to cross out?

Continuing with our current theme of changing unwanted behaviours in January, we thought we'd talk about buzz-words we'd love to get rid of this year!  MSN.com recently shared a list of over 30 words that should be avoided at all costs. To help stop you from adopting these annoying phrases, we've listed our top 10 annoying 'current' words.

According to Business Insider, "Whatever" was considered the most annoying word in 2018 by 33% of respondents in a poll. The second-place finisher was "fake news" at 23%, closely followed by "no offense, but" with 20%.  'Whatever' had topped the poll for 9 years at that point, and we're sure it's still up there in the most annoying words!

To be "extra" is to be over the top.  We're not saying 'over the top' is necessarily a bad thing per-se, but can we just call it that? Or extravagant, extrovert, fabulous ....... 'Extra' is just a bit extra-annoying really.

The word "woke" began as a term for someone who understands issues of social and racial justice. However, as more and more people have begun to use it, it's lost its power and just become a bit annoying really.

Calling something 'basic' has been the easiest insult of the past five years. Is someone ordering a super-trendy over the top coffee? That's basic. Wearing Ugg boots even in the rain / summer? Basic. Ok, every generation has new words for good or bad, but used in this way, 'basic' can be a bit mean really. And for that reason, we'd like to see the back of it.

Made popular by President Donald Trump, the term "snowflake" is used to refer to someone who is fragile and believes they are unique, or struggles to cope with harsh realities.  It's a popular word, but frankly, any word 'coined' by Donald Trump can 'do one' for us.

To adult is to behave like an adult, to do the things that adults regularly have to do, but the word 'Adulting' has become a bit more than that, as in 'I just can't Adult today' Merriam Webster says: It's not a serious word, but it's increasingly used in published, edited text, and it keeps showing up in ad copy, which is a certain sign of some kind of linguistic arrival.

According to Urban Dictionary, 'shade' can be used as a noun or verb.  In the Noun form, Shade is a response to some kind of illegitimate or unwanted behaviour. eg Person 1: They went to the club and didn't even invite us! Person 2: Shade!   In the Verb form, we can 'throw shade' which is to act fake, funny or shady around someone.  Again, it's not a word that describes very nice behaviour, is it?

All of these words are used in ways which mean something slightly different to their original meanings, but this one is literally used to mean the opposite! 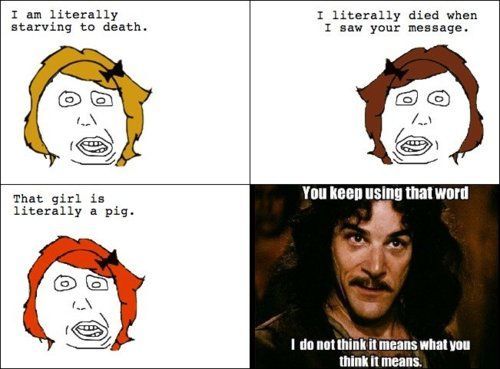 Another word that in it's urban use, can have us going around in circles.  Used to emphasise a statement: ‘I'm sorry, he was totally out of order’ and also, to express agreement 'Totally'.  We could totally go on forever!

Hangry is a mash-up of hungry and angry, and an adjective that describes being irritable due to hunger.  We'd love not to be angry at this word, but this close to lunch, we're far too hangry!

What are your slang pet-hates?  Do any modern uses of words dive you crazy, or has a newly-coined phrase got your goat?  Let us know!

So those are the word-trends as we head in to 2020, but would you like to know more about what we can expect from Social Media trends this year?  Bucks Biz resident 13Ten Marketing are running a workshop right here in the iCentre on Tuesday 21st January, where you can learn all about how to make Social Media work for you in the coming year.  You can find out more, and get your ticket, which is just a £5 donation to Willen Hospice, HERE.